Skip to content
View cart “Jagermeister Herbal Liquor 700 ml” has been added to your cart.
Browse 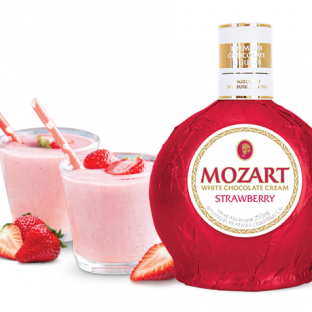 Mozart Distillerie GmbH (established 1954) of Salzburg, Austria, is a maker of chocolate liqueurs. The firm was previously known as H.C. König and Harald König is the Chief Executive and President.

The firm has successfully developed a brand based around Wolfgang Amadeus Mozart, who was born in Salzburg, which emphasises the blending of different elements that make up a liqueur in a similar way to the different parts of a work of music. The firm claims that the Andante from Mozart’s String Quartet No. 2 in D major, K. 155 (K. 134a) is played into each batch approximately 380 times (during a 24-hour period) as part of the manufacturing process, which they describe as “soundmilling”. In addition, ultrasound is used in order to pulverise the cocoa and achieve a smoother consistency in the finished product.

Distinctive packaging has been developed using short, round, bottles that contrast with the tall bottles often used for alcoholic beverages and enable the liqueur to be double-stacked on the shelf in a retail outlet, allowing more product to be displayed in the same shelf space.

A carefully produced dark chocolate liqueur from the Austrian chocolate fiends at Mozart. A combination of cocoa and vanilla, with some of the cocoa spirit aged to enhance the flavour.