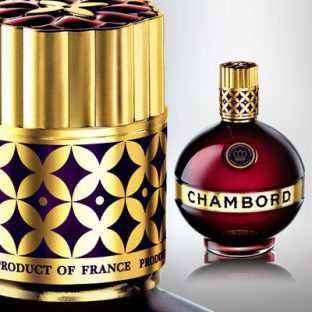 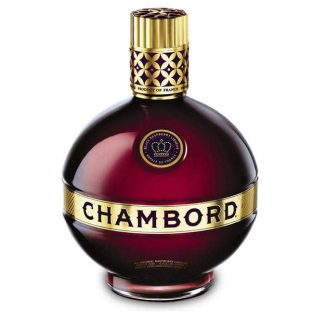 Chambord Liqueur (pronounced [ʃɑ̃.bɔʁ]) is a 16.5% abv raspberry liqueur modelled after a liqueur produced in the LoireValley of France during the late 17th century. The Chambord product brand has been owned and produced by the Brown-Forman Corporation since 2006.

Chambord is made from red and black raspberries, Madagascar vanilla, Moroccan citrus peel, honey and cognac.

The Chambord brand was founded in 1982. The drink was inspired by raspberry liqueur made in the Loire Valley in the late 1600s, said to have been introduced to Louis XIV during one of his visits to the château de Chambord. It was common during that time for liqueurs and cognac to be consumed with elegant meals.

In 2006, the Chambord product brand was acquired by the Brown-Forman Corporation.

Chambord comes in a spherical bottle. Until mid-2010, the bottle came with a metallic gold plastic lettered ‘belt’ around the middle, and a crown atop its lid. The bottle was modeled after a globus cruciger.

In the U.S. market, the manufacturer began using a different bottle design in summer 2010, with modifications to the belt, lid and other elements.

In addition to redesigning the bottle for the traditional Chambord liqueur, the manufacturer has also begun using the Chambord brand name on a flavoured vodka.