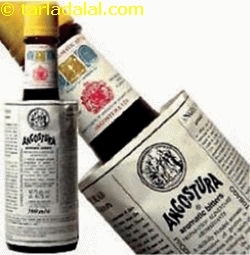 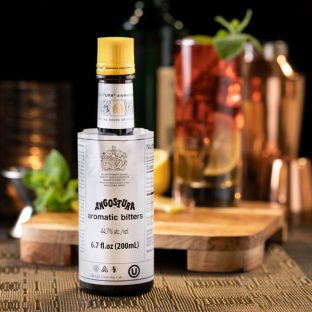 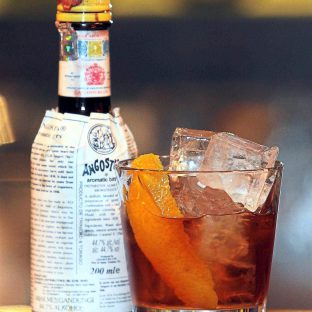 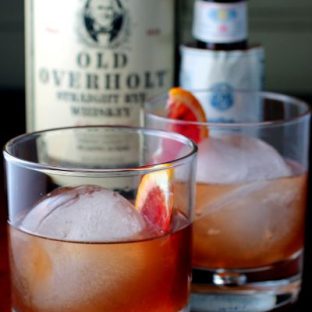 Angostura bitters (English: /æŋɡəˈstjʊərə/) is a concentrated bitters (herbal alcoholic preparation) based on gentian, herbs and spices, by House of Angostura in Trinidad and Tobago. It is typically used for flavouring beverages or, less often, food. The bitters were first produced in the town of Angostura (now Ciudad Bolívar, Venezuela), hence the name, but do not contain angostura bark. The bottle is recognisable by its distinctive oversized label. ‘Angostura’ is Spanish for ‘narrowing’, the town of Angostura having been located at the first narrowing of the Orinoco River.

Angostura bitters are a key ingredient in many cocktails. Originally used to help with upset stomachs of the soldiers in Simón Bolívar’s army, it later became popular in soda water and was usually served with gin.

The mix stuck in the form of a pink gin, and is also used in many other alcoholic cocktails such as long vodka, consisting of vodka, bitters, and lemonade. In the United States, it is best known for its use in whiskey cocktails: Old Fashioned, made with whiskey, bitters, sugar, and water, and Manhattan, made usually with rye whiskey and red vermouth. In a Pisco Sour a few drops are sprinkled on top of the foam, both for aroma and decoration. In a Champagne Cocktail a few drops of bitters are added to a sugar cube.

In Hong Kong, Angostura bitters are included in the local Gunner cocktail. Though not in the classic recipe, bartenders sometimes add more flavour to the Mojito cocktail by sprinkling a few drops of Angostura bitters on top. Bitters can also be used in “soft” drinks; a common drink served in Australian and New Zealand pubs is lemon, lime and bitters. In Malawi, bitters are added to a mix of crushed ice, ginger ale and Spriteto make a ‘rock shandy’.

Angostura Bitters Drink Guide, a promotional booklet of 1908, was reprinted in 2008 with a new introduction by Ross Bolton.

Among certain bartending communities (especially in Malaysia) shots of Angostura are taken as the ‘bartender’s handshake’ either during or after the shift is done.

The largest purveyor of Angostura bitters in the world is Nelsen’s Hall Bitters Pub on Washington Island off the northeast tip of Door Peninsula in Door County, Wisconsin. The pub began selling shots of bitters as a stomach tonic for medicinal purposes under a pharmaceutical license during Prohibition in the United States. The practice, which helped the pub to become the oldest continuously-operating tavern in Wisconsin, remained a tradition after the repeal of Prohibition.

As of 2018, the pub hosts a Bitters Club, incorporates bitters into food menu items, and sells upwards of 10,000 shots per year.